We’re half way through this league season and with last night’s wins I’m more than 100 points above the border for moving up to D1. I’m no chicken, so I can start counting the unhatched. Yes, not only will I be moving up to D1 next season, in the final two league sessions I will also be crushing the entire D2 field to win all the marbles. Like a Democrat with sizable lead going into an election, I’M INVINCIBLE!

Well now that I’ve jinxed myself into losing every hand the rest of the season and actually moving down to D3, time to reflect a little on what’s been going right before it all goes oh so wrong.

First, where is it going right? Well I’m also having a pretty good season so far in North Kanto (albeit for only 2 sessions so far) and I had a horrible start to WRC league (where I’m still only one session in). Differences between those three leagues? The biggest is of course the basic rules: WRC has ippatsu and ura/kan Dora whereas the other leagues use the “competition rules,” Reach is just another hand point and that’s the end of it. That takes away a lot of the luck factor indicating that I am a player of unmatched skill in normal league play who just can’t overcome the nagare of the ippatsu luck boxes at WRC.

Self aggrandizing hyperbole aside, actually I think the bigger factor is a more minor difference. At WRC, we only play one game as a 4 person grouping and then move onto a different group. For Regular league and North Kanto we play as the same 4 person group all 4 games of that session.

Of course you know I’m not a big believer in the flow of luck(nagare), but I am a big believer in what I think people mistake nagare for, i.e. breaking the psyche of your opponents. If you can throw people off their game and instead make them play in reaction to you, you have gained the advantage and now control the game.

It’s definitely a departure from the way I used to play which was always pretty straightforward, just go for the biggest hand I can make pretty much every hand until I throw into someone else’s, sometimes into a monster. Lately, however, instead of always playing in a straight line, I’ve been throwing in some curve balls. I’ll discard middle tiles like I’m aiming for Chiitoitsu or even Kokushimusou, continuing late into the hand when if I wasn’t already tenpai I should probably start giving up. Or I’ll continue throwing dangerous tiles with a weak hand even though someone has already reached. When the hand ends, Psych! I show my pathetic little hand or worse, I’m not even tenpai! You can see some players start to agitate, perhaps even decide they’re going to stop paying attention to me at all.

And here’s where I’ve gotten extra lucky. Soon after these bluffs where I’ve suffered little or no damage, I’ve won several big hands. A great example was last month’s league when I won a mangan from someone as dealer who I’m pretty sure thought I was just goofing off again. I’d ponned a one and nine in different suits, and the white dragon, certainly an outside hand looks dangerous there usually. But I’d also made some weird pons in earlier hands and then finished without a ready hand so who knows? Maybe that Garthe donkey is just trying make me fold again, she thinks. When she threw the last South into my Honroto, she seemed genuinely surprised, not believing her eyes as she checked the hand an extra few seconds to be sure it was 8000 points. She definitely wilted a little after that and won few hands the rest of the day, none big. I know how she feels, I’ve wilted to exactly the same crap.

It was the same way yesterday until the final game when 2 players finally decided they were going to stick to their guns and really ignore me for the rest of the day. It worked as it was the only game they finished above me and that I didn’t win yesterday. And it’s been similar in North Kanto. Similar happenings have so thrown people off their games that by the end of the day, I was really only playing against one other player.

Again, I am the first to admit I’ve gotten lucky. Not only have I gotten the big hands, but I’ve also somehow avoided getting run over by any freight trains. Now that I’ve explained what I’ve been doing, it will be easy to understand next month as I sheepishly report how I’ve sunk straight to the bottom by somehow throwing into 5 yakumans in only 4 games. Psych! Better talk myself up now while I’m riding high.

Look at me in first place! I ain’t never coming down! 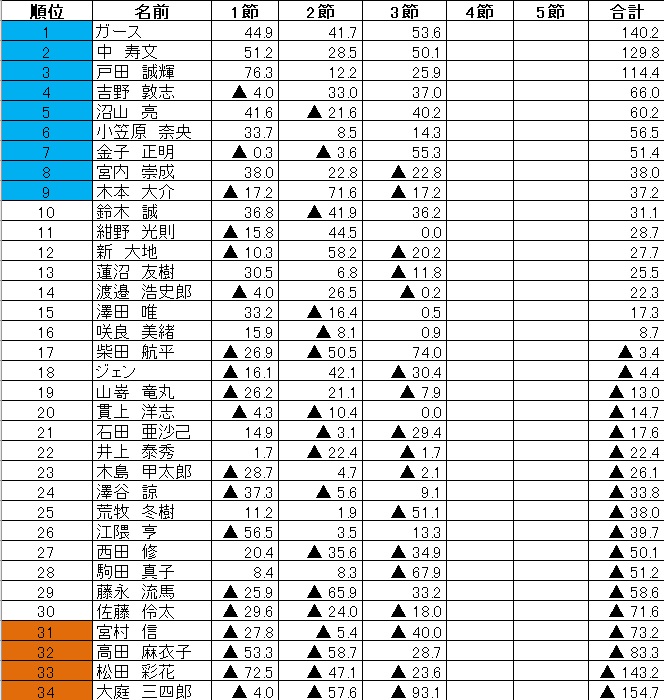 Note to self #too-many-to-count: consistency!

You may have missed

Note to self #too-many-to-count: consistency!