Well, it's been an uphill battle getting good western (read: English) support for Japanese Riichi Mahjong. I started playing Riichi in 2005 when I imported a video game for my Sega Saturn (anymore remember that?!). It was one of those "play against anime girls" Mahjong games - and the "appeal" for the game was rather superficially in the graphics... but the gameplay intrigued me. The game had more depth than I originally gave it credit: open vs. closed, safe discards vs. pushing for a win, and the variety of colorful hands ("Heavenly Hand", "Thirteen Orphans" and "Catching the moon from the bottom of the Ocean") to shoot for.

But in 2005, if you wanted to play Riichi Mahjong, you played with a real set and 3 friends — not easy to find 3 people interested in an "obscure" Japanese form of Mahjong - especially when most people think of Mahjong as "that solitaire tile-matching game?!".

Fast forward to 2020 and we now have a number of possibilities to play Riichi Mahjong online - including the web-based Tenhou which remains the sort of "standard bearer" of clients (there are many thousands of players online at any given time). But the one leading the pack for westerners these days is Mahjong Soul.

The game has been around for a few years and it really doesn't look much different than the other anime-inspired mahjong games (read: Saki Anime... if you haven't seen it, you're missing out on an entire series revolving around Mahjong). What sets it apart is the support in English. Not a rough translation option but a full blow English client that is accessible on the US iTunes/Apple store, Android Google Play and a simple web-based client that runs on every modern computer (Mac, Linux and PC). Everything has been lovingly translated except the professional Japanese voice actors which actually adds to the charm of the game. Most times when the characters are speaking you get English text boxes to let you know... but sometimes they will just shout something exciting at you in Japanese and it's those quirky touches that make it charming.

Like the aforementioned Mahjong Hime, undreneath the high-quality Mahjong play is a 'gatcha' (Japanese capsule-toy-vending machine) mechanism. You play the game to accumulate "summons" at the temple... which you can acquire new character skins, new Riichi betting sticks, new tile sets, new music, etc. All of that is superficial - none of it affects gameplay in any way. Mahjong Hime gives you many more free chances at the swag ... in Soul you are expected to support development ($5 per Month for the '30 day charm pass') to get lots of chances at swag... Playing for free is fine if you don't mind the stock 2 characters they give you to start... I did pony up the $5 to support a developer that is providing a superb gaming client for the western world.

Below you'll find some screenshots from my iPad of Mahjong Soul. As you can see, the stock character (the girl featured 3x in one of the photos) shows up a lot as this game encourages paying some money to get characters other than the defaults... The game probably goes a bit too far to "obscure" the in-game currency ... there are coins, jade, stardust and about 3 other ways to buy things in the game. The game also has a reasonably complicated "bonding" system whereby you can win/acquire gifts to give to your character to raise their bond level from 1 heart to 5 hearts... as you rank up your character, new voice lines and additional emojis (which you can tap on during the game to express frustration, anger, joy, boredom, excitement, etc). It's probably borderline "too complex" but it can largely be ignored for those just wanting to play a top-notch Japanese game of Mahjong with no advertisements. The interface is squeaky clean.

The game features incredible graphics, relaxing music that rises in tempo as the games get tight and a host of little touches that make it super easy to play for westerners. It has a larger online player base than Mahjong Hime and so matches are usually arranged within a few seconds (vs Hime which may take a minute or two). The ranking system is a bit more elaborate - making sure you are pitted against players of similar nature (though in the common beginner room the level of play ranges from rank beginners to better players looking to beat up on some newbies). There are tournaments, lots of good video commentary on their website including lots of live streams of the best players playing with commentary (in English!). The game has an excellent tutorial mode and when you play against friends or the computer, you can set the timer to 5 minutes per move which gives you lots of opportunities to get your bearings which is helpful for newbie players.

It's taken 15 years but western players are finally getting some legitimate support for Riichi. The depth and relative complexity of the game are off-putting enough - but when all of your best choices were Japanese-only, it was a hard mountain to climb. I have no reservations about recommending this to anyone that has a passing interest in the Japanese style of play. As of the time of this writing, this is the best place to start. 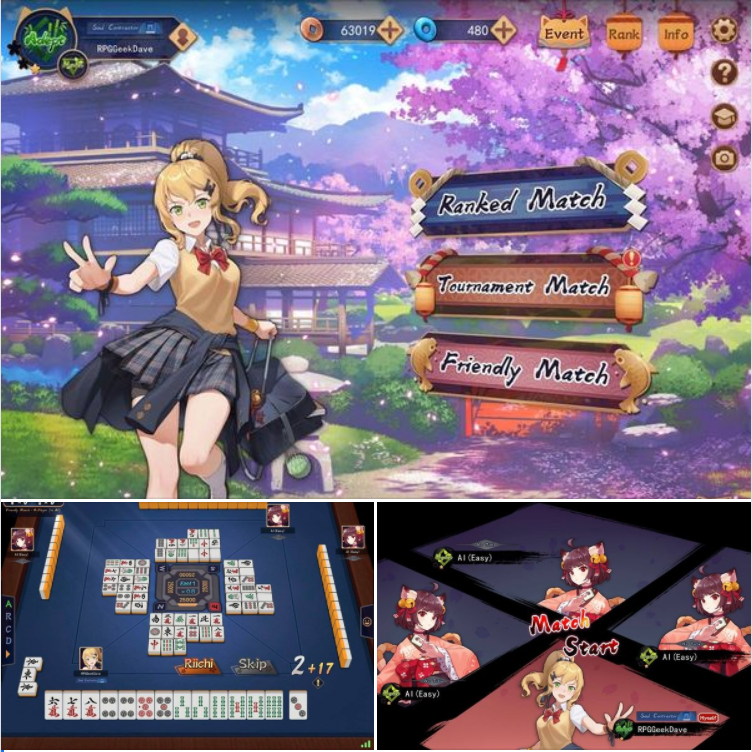 The game is really amazing. And probably the best right now for english speaking players.
Life is as beautiful as you want it to be, but it´s only one. That´s why you must not get tired of it. Don´t care if you don´t say something that seems "important" because your mere existence is important for someone.
Top
Post Reply
2 posts • Page 1 of 1