I tend to play on Tenhou but more recently have been enjoying some of the better offerings on my iPad. I thought I'd talk about one of them: Mahjong Hime.

Hime has been around since 2012 and it's extremely similar to the other iOS game I enjoy — Mahjong Soul. Even the title screens are nearly identical. Unlike Mahjong Soul (which has a great English client and simple web interface along with iOS and Android), Mahjong Hime is in all-Japanese and if you want to play on the PC you will have to do so through Steam.

The graphics are excellent - animations are top-notch, music is relaxing and the Mahjong is excellent. It contains everything you would expect from a modern Mahjong client: easy online multiplayer, friend system to play with people you know and reasonable computer AI to practice against when you just want your opponents to move fast. The game is free to play but read on!

The core of Mahjong Hime is Riichi style Mahjong but they layer on a 'gatcha' system on top... The term 'gatcha' is the capsule-toy vending machine mechanic - you play games, gain coins and you can spend those coins to spin the 'gatcha wheel' where you get some swag for your character. It could be a new Riichi betting stick, colorful tiles or backgrounds to play on, a new color of nailpolish for your character or even a brand new character (those are the most rare... about a 3% chance to get a character when you spin the 'gatcha wheel'). Of course you can pay real money (in this case Yen) to speed up the process by which you acquire swag items. Compared to Mahjong Soul this game gives more chances at the swag without feeling the need to pay for chances at the ‘gatcha wheel’.

The gatcha system can be completely ignored - it's cosmetic only and does not affect the high quality Mahjong on offer here for free (no ads - the developers get paid by the 'whales' who spend money trying to get all the shiny gatcha-swag).
Although it's all-Japanese, the main screen is easy enough to navigate. The three main hex-buttons to the right are: Ranked Online Battle (top), Non-Ranked Online Battle (lower left) and Friends Room (lower right - where you can create a room for just your friends to play or play against the CPU AI).

The in-game graphics are very pleasing - fine on the iPad mini but a little small for my eyes on my 6" iPhone. The Japanese voices are professionally done and it's a pleasure to hear the winning hands called out as the points rack up on screen. The clicking and clicking of the tiles and the increased tempo of music as the game gets tense is a joy. The game runs in “seasons” where they have certain quests to be obtained. Like not dealing into Ron in a game or getting a certain hand. These can be ignored unless you like the challenges. Chances at the gatcha wheel can be had for good progress here.

I slightly prefer the in-game aesthetics of Hime over Soul. It just feels a bit smoother and not having to bond with your characters to get them to do cool things like read off the list of Yaku on the win-screen is nice. Soul wins out for Western (read: English) support but if you've played any Riichi video games in the past, the interface will be very familiar. If you're interested in a variety of characters, tiles, backgrounds, etc. (the game features over 100 possible Riichi betting sticks!) the 'gatcha' system in Hime is a lot more enjoyable than in Soul (which mostly requires that you support the game with real money... something I'm fine with but will turn off some players).

I've provided a few screenshots of the game as taken on my iPad mini. The game is available for iOS, Android and Steam (PC-Windows). Unfortunately on iOS you must log into the Japanese iTunes store to download - it's not yet available in the US store (unlike Mahjong Soul whose English client is available in the US). 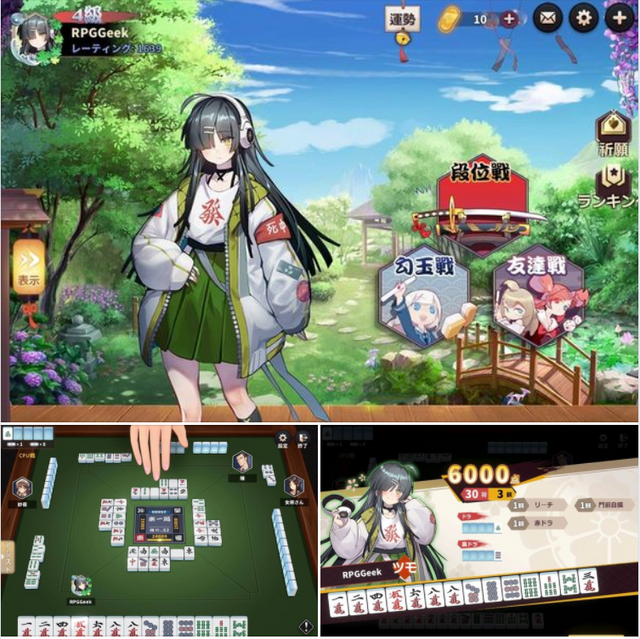 No sooner did I post this mini-review when a big update drops for Hime that adds in a Bonding system - 5 hearts with gifts and it unlocks new voices/outfits... similar to Mahjong Soul.

I haven't figured it all out yet... but it's a fairly major change.
Dave
Mahjong Rank: ドンキー
Reach Mahjong Forums - New User Introduction Thread
Top

If anyone is interested, I've put together a quick English UI Guide wiki for Mahjong HIME.

I also signed up for the new pre-reg Web Client for the Japanese Riichi game!